This is a demake of the classic Atari 400/800 game Star Raiders. It is intended to be as faithful as possible while making some improvements.

You are the pilot of Star Cruiser 7, protector of the galaxy. A fleet of enemy Zylon fighters has intruded the galaxy, bent on destroying all of the peaceful space stations you are entrusted to protect. Your goal is to hunt down squadrons of enemy fighters and destroy them.

Both the keyboard and the gamepad are used to control Star Cruiser 7.

Arrows/dpad: Steer the ship through space.

When the game starts, you will be by yourself in an empty sector of the galaxy. Watch out for asteroids! They are everywhere. You can shoot them before they strike your ship. It is a good idea to turn on your shields! However, be aware this will use up your energy a little faster.

The first thing you should do is view the galactic chart. Hit 'G' to view it: 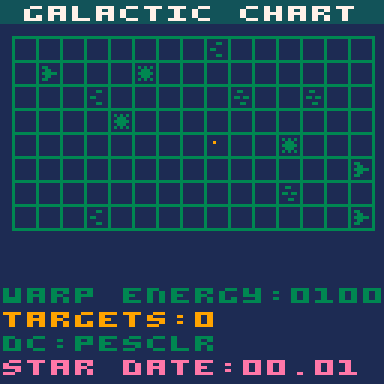 The glowing dot is your location in the galaxy. Use the dpad to move around the hyperwarp target destination dot. Once you have selected a destination, hit 'F' for fore view and then hit 'H' to engage hyperwarp. If you are in the 'novice' difficulty mode, you will simply warp to your target destination. At higher difficulty modes, you must keep the ship steady in hyperspace by continuously centering the reticle with the arrows/dpad:

If you successfully pilot Star Cruiser 7 through hyperspace to your target destination, you will get a flashing "Red Alert" warning if you have entered enemy territory.

Enemy squadrons on the galactic chart look like this:

Space stations on the galactic chart look like this:

The long range scan is a zoomed out view of the surrounding space, from high above the ship, so you can see far-away objects. You can steer the ship while in this view and examine the relative position of stars, asteroids, enemy ships and space stations relative to the ship.

When you encounter Zylon fighters, you will see ships of three types:

Fire photon torpedos at them with 'X'. To help aim, you activate the attack computer with 'K'. You will see a small monitor in the bottom right hand of the screen. Enemy fighters and space stations will appear in this monitor in bright green. If the vertical and horizontal locking guides are illuminated as they are here, your photon torpedos will fire a double blast and will home in on the locked enemy. 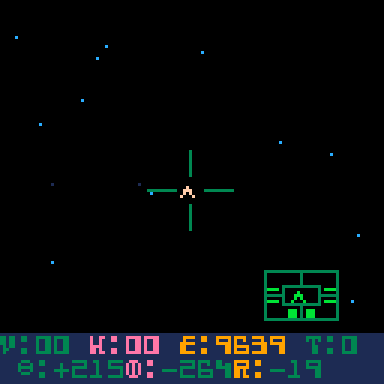 If desired, you can also engage the tracking computer, which will show a reticle on screen showing which enemy is targeted. The view will automatically shift between 'aft' and 'fore' when this is engaged, like this:

Make sure to not delay hunting down enemy squadrons efficiently. The star date (visible on the galactic chart) advances as you play and periodically, enemy squadrons will advance towards a space station and surround it, which looks like this (SPED UP TO ILLUSTRATE):

When this occurs, the sub-space radio will report to you that a starbase has been surrounded. You should immediately warp to one of the surrounding enemy squadrons and eliminate them! Otherwise, after more time elapses, they will destroy the starbase!

Here's a brief description of each value shown on the ship's console: 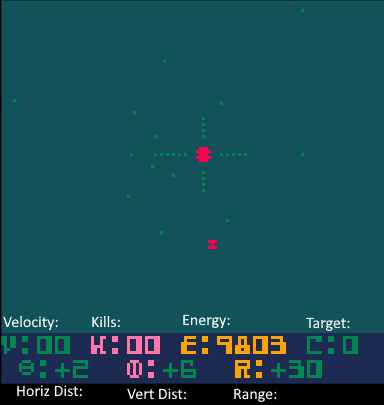 The most important value to keep an eye on on this console is your ship's energy. Different things use energy at different rates. If you are stationary and no ship features are activated, you will still slowly use energy for the life support system.

At difficulty levels higher than novice, sometimes suffering enemy torpedo or asteroid impacts with shields on will result in ship damage. On the galactic chart, there is a Damage Control or "DC" readout showing the letters: "PESCLR". These stand for:

Each of these components can be in one of three states: operational (green), damaged (yellow), or destroyed (pink).

Engines: When damaged, you move much more slowly at sub-warp speeds. When destroyed, there's a backup engine that enables you to move through space, but at an extremely slow pace.

Shields: When damaged, further impacts take more energy to keep you from dying. When destroyed, you're on your own---the next impact might be fatal, so make sure to shoot down enemy torpedos and asteroids before they reach you!

Computer: When damaged, the target offset readout no longer functions. When destroyed, targeting and attack computer can no longer be used.

Sub-space radio: When damaged, the galactic chart can no longer tell you what resides in a given sector, only that something is there. When destroyed, you no longer will receive messages about space stations getting surrounded by enemy squadrons.

There are three ways the game can end. Either you run out of energy, are destroyed by an asteroid or Zylon fighter torpedos, or you have destroyed all enemy squadrons in the galaxy. After the game ends, you will be given a rank and class according to your performance.

What a great homage to an Atari 8-bit classic (what brought me here to check it out!)

Nice! Can you make the .p8 file available as well?

Sure thing. It's also on the PICO-8 bbs already if you want to grab it from there but I'll upload it here on the itch page.

Thanks! That is useful for emulators... We're planning on adding Pico support to Argon later this year...

Very cool. I love how PICO-8 has found itself into the emulation universe and is becoming playable on many devices which support RetroArch. It fits right in!

We bring it to phones, tablets, TVs, chromebook and desktop. We pre-load games where developers have given us permission. So no searching for ROMS, cores, BIOS, controller settings, etc.  it is zero-config. Our goal its to bring retro gaming (and eventually Pico-8 as part of that) to a much wider audience! 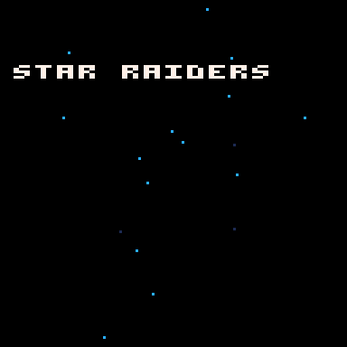